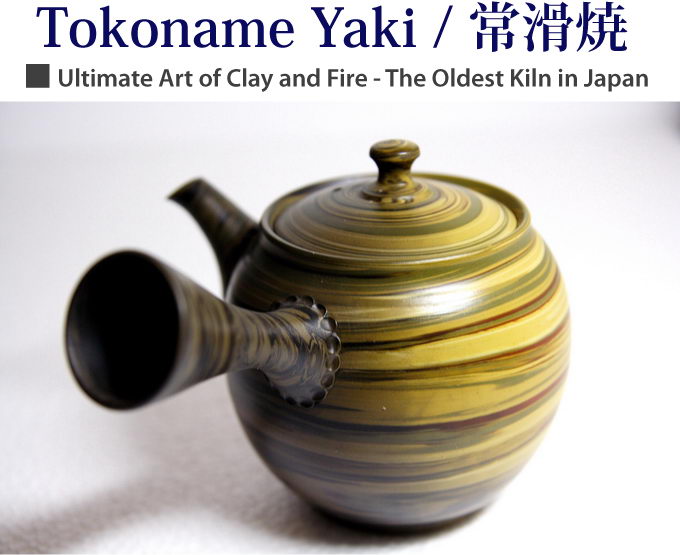 The history of Tokoname is very long. It was started since 12th century. It is one of the oldest kiln (窯) in Japan. During Edo Era (which started since year 1603), Tokoname developed 2 different styles which were known as Mayakemono (真焼物) and Akamono (赤物).

For Mayakemono, the main products produced during early Edo Era were vases or roof tile. At the later stage of Edo Era, they started to produce relatively smaller item such as tea ware, flower ware and Sake ware. As for Akamono, they produced vases and roof tile in the beginning stage of Edo Era. At the later stage of Edo era, the earthenware pipe became very popular. The first tea pot appeared during Bunsei period 文政年間 (1818-1829). It was produced by Inaba Takamichi 稲葉高道. When he traveled to Akiba Shrine of Akiba Mountain which was very releigous place located in West part of Shizuoka Prefecture, he obtained a copy of Ashikaga Tea Pot Design Collection 足利家同朋巽阿弥秘蔵 茶器三百五拾一品之内 茶瓶四拾三品 that used to be treasured by Ashikaga Clan. Ashikaga Clan was the ruler of Japan back in between 1336-1573. The material for the clay was either white clay or rough clay that was usually obtained from the rice field.


The first Tokoname teapot appeared during Bunsei period (文政年間 1818-1829). It was made by Inaba Takamichi (稲葉高道). When he traveled to Akiba Shrine of Akiba Mountain which was a religious place located in the West part of Shizuoka Prefecture, he obtained A Copy of Ashikaga Teapot Design Collection 足利家同朋巽阿弥秘蔵 茶器三百五拾一品之内 茶瓶四拾三品. The tea pot collection used to be treasured by Ashikaga Clan. Ashikaga Clan was the ruler of Japan in year 1336 to 1573. The material for the clay Jumon used for making tea pot was either white clay or rough clay that was usually obtained from the rice field.

In year 1854, Sugie Jyumon (杉江寿門) produced the first Red Clay Tea Pot (朱泥) in Tokoname. He took Ashikaga Teapot Design as a reference for his design. In addition, he worked with a doctor by the name of Hirano Chuji (平野忠司). Hirano was a very enthusiastic collector of Yi Xing (宜興) Teapot. Hirano found that the red clay in Tokoname area has similar mineral compositions as the clay from Yi Xing area. By then, they developed the refining method for clay and successfully introduced the Tokoname red clay Teapot.

In year 1878, Jyumon invited Kin Koshi (金恒士) from Yi Xing. He introduced the Yi Xing making style as well as curving technique to Tokoname. He had a significant contribution to the further development of Tokoname teapot. The Tokoname teapot has been improved and its design became very refine thanks to his contribution. Jyumon effectively learned the technique from Kin Koshi and he also produced a number of tea pot in Yi Xing style.

During Tenpo period (天保年間 1830-1843), the second generation of Ina Chozo (二代伊奈長三) had developed Mogake technique (藻掛). Mogake is the technique of wrapping the clay teapot with algae. During burning the tea pot in the kiln, the reaction between the minerals of algae and teapot will give rise to a unique oxidized and burned pattern on the surface of teapot.

The Natural Red Clay in Tokoname

The Tokoname teapot became very famous in the history of Japany, thanks to the discovery of Tokoname natural red clay and its outstanding performance.

Unfortunately nowadays there are very few artists who truly understand the performance of clay. The most of artists usually distinguishes clay only based on its color and texture. It is called red clay as long as clay is red in color. Based on my survey, most of Tokoname teapot was no longer made of natural red clay. Even very famous artist such as 3rd generation Yamada Jozan who was awarded of “The Living National Treasure” was not using natural red clay in his latter half of production. It seems that the legendarily Tokoname red clay was substituted by artificially mixed red clay.

Recently I coincidently discovered that one of teapot master in Tokoname by the name of Gisui preserved some natural red clay. According to him, it was kept by his acquaintance and it was given to him. It appears to be in orange color. I often heard from various artists and senior people saying that Tokoname red clay was supposed to be in orange color. I bought it and carried out verification with tasting. It was very good clay. The taste tells everything that it was fine natural red clay.
Unfortunately there is only one artist who keeps this clay. Moreover he only keeps limited quantity of clay. It may be the last remaining Tokoname natural red clay.