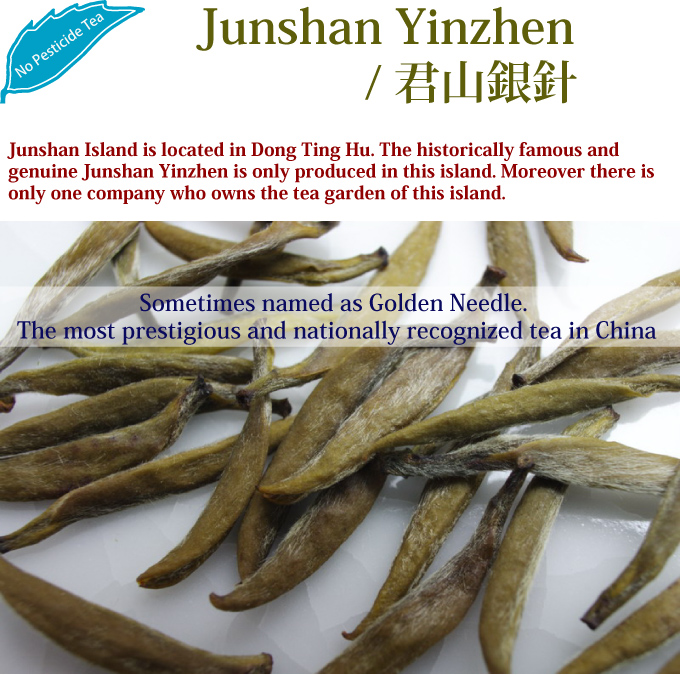 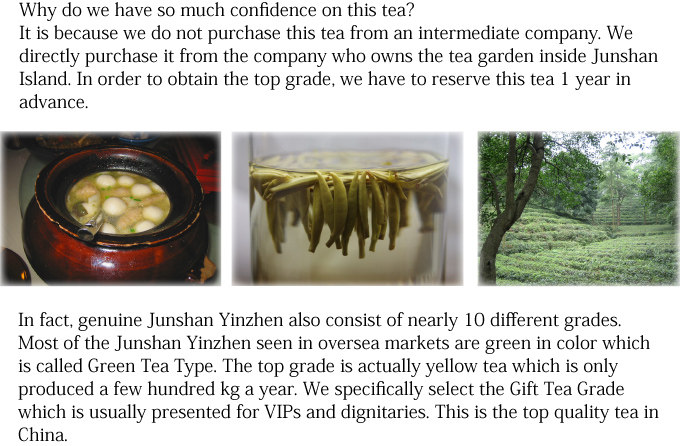 Junshan Yinzhen, the Yellow Tea, is the most exclusive tea among its group of tea. When brew in a glass, the leaf which looks just like the sword moving up and down is described as ‘Silent bamboo forest’. Junshan Yinzhen is only produce using the tea leaves from the tea garden at the Junshan Island, which is located in the middle of Dong Ting Lake of Hunan Province.
At this moment, there are many other kinds of Junshan Yinzhen produced nearby Dong Ting lake also sold as ‘Junshan Yinzhen’. However their growing environment and difference kind of manufacturing know-how makes them different quality from the original Junshan Yinzhen that is produced from Junshan Island.

In the history, it was believed that during Tang Dynasty, when Wencheng princess (文成公主) married to Tibet, she picked the Junshan tea as one of her trousseau. Junshan Yinzhen became the tribute to emperor since Wu-dai (五代，the Dynasty after Tang), and continued during Song, Ming and Qing Dynasty. During Tang Dynasty, Junshan Yinzhen was called “Yellow tail leathers” (黄翎毛 Huang Ling Mao), because when brewed, the yellow bud covered with down was standing up in the glass just like yellow pinion. As recorded in the book Cha-Jing (茶经, The Tea Scripture written by Lu Yu 陆羽) ， during Song Dynasty, it was known as “White crane tail leathers” (白鹤翎 Bai He Ling), because of this tea was planted at the White Crane Temple (白鹤寺 Bai He Si), when brewed using water from White Crane Well (白鹤井 Bai He Jing), it looked like White Crane walking in the water. Besides, because of its white down, it was also called “White down needle” (白毛尖Bai Mao Jian). It was named as Junshan Yinzhen during Qing Dynasty. 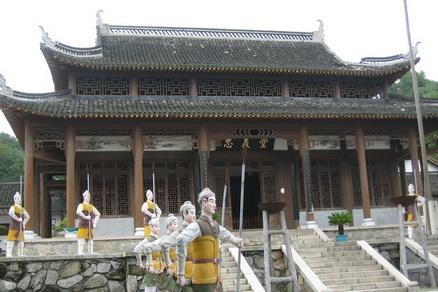 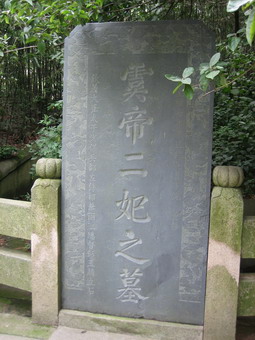 Junshan Yinzhen has won the Gold Prize in year 1956 at the Leipzig Expo； its beautiful appearance and tasting note get a favorable opinion by the people.
In year 1957, it was selected as one of the Top Ten tea in China.

In year 1972, when China re-gained a chair as a permanent member of United Nation Security Council, Junshan Yinzhen became the only tea to serve the Prime Ministers and Diplomatic Envoys from various countries.

Since 1980, it has been prized as the high grade tea in Hunan Province.

In year 1982, it was appraised as the top quality tea by the Commercial Section in China，and in the following year (1983), Junshan Yinzhen was certified as the high grade tea by the Foreign Trade Department of China.

In year 2006, Junshan Yinzhen has been selected by the China Commercial Affairs Department (国家商务部), and Foreign Affairs Ministry (外交部) as the National Gift Tea to Russia President Vladimir Putin. 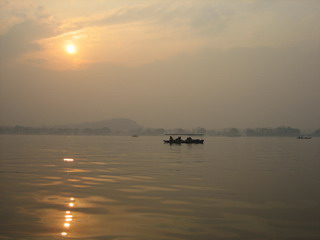 Junshan Island is located in the middle of Dong Ting Lake, which is 15km North East of Yueyang (岳阳) in Hunan Province. The island has 72 mountains with various sizes, these are where the tea gardens located. The reason why the tea produced in Junshan Island is good are:

Thanks to these factors, tea leaves at Junshan Island are very rich in amino acids, and with specific and fatty shape. 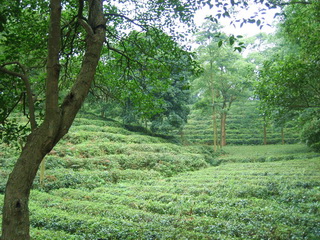 In the past, Junshan Island was involved in wars over and over again. Each time, the owner of tea garden changed. Therefore, there is lack of information on its cultivars.
The most exclusive grade of Junshan Yinzhen is produced from the first bud that comes up early in the spring. One bud usually consists of 4-5 pieces of young leaves.
Hand-plucking is carried out under very strict criteria. At first, the length of bud should be within 25-30mm and width is within 3-4mm. Stem with length of 2mm should be plucked together with bud.
In addition, the bud that fall into following 10 criteria should not be plucked:

1) Bud that is excessively grown

2) Bud that is not straight

9) Bud after the rain

Due to very stringent criteria, even an expert can only manage to harvest as much as 0.5kg of bud in a day. In any event, 0.5kg contains about 10,000 pieces of bud.

It is said that the best time to harvest the best quality bud for Junshan Yinzhen is only 14 days in total throughout a year, which falls between 4 days before 清明 (Qing Ming, occurring on April 4 (leap years) or April 5 (other years) of the Gregorian calendar)  and 10 days after 清明.
The first bud in spring comes with so-called 魚叶 (Yu Yue, the tiny leaf attached to the bud), that is to protect bud from cold temperature. This naturally made cover could be a good indication to recognize the high quality Junshan Yinzhen.

The most distinctive process of yellow tea is called 悶黄 (Men-huang, the smothering process). The leaves which processed in a similar way of green tea are wrapped and kept for 4-5 days that generate typical flavor and color of yellow tea.

The purpose of 殺青 is to inactivate oxidative enzyme such as polyphenol oxidase (PPO) with heat.
Unlikely to Japanese green tea that is heated by steam, Chinese green tea is heated by pan frying method. Pan frying is literally frying tea leaves in a metal pan when the temperature of pan reaches 200℃. With high temperature, it takes very short time to heat the tea leaves and inactivate oxidative enzyme.
In the production of yellow tea, fresh tea leaves will be fried in a pan too. However it is important that the starting temperature of pan is kept at much lower temperature, i.e., 95 - 105℃. The pan temperature will be then gradually increased until 120 - 130℃ and then progressively decreased.
When the temperature of tea leaves is slowly increased, enzyme like PPO will rapidly oxidizes polyphenols at maximum speed. The gradual increment of temperature will accelerates enzymatic activity. Eventually, when the temperature of tea leaf reaches > 60℃, most of the enzymes will be inactivated, and this prevent tea leaf from turning into black tea.
After 殺青, tea leaves are dried by burning fire made of specific type of tree. Usually, strong fire is used in order to prevent tea leaves from absorbing essential oil of firewood. Tea leaves will be cooled down after drying process. The water content of tea leaves was reduced to 40-50%.

Each 1kg of tea leaves are wrapped with paper and placed inside a pot. It is left under humid condition for 1-2 days. During this period, auto-oxidation of polyphenols in tea leaves was gradually underway. In this oxidation, no enzyme is involves, therefore, it is a non-enzymatic oxidation. The typical yellow color of yellow tea is composed during this stage.

Tea leaves are dried again in order to distribute moisture evenly.
Heating process also generates identical Junshan Yinzhen flavor.
After the drying process, tea leaves are cooled down and even out moisture. Eventually, the tea leaves contained about 20% of moisture.

Once again tea leaves are wrapped with paper and 悶黄 will be carried out.
In total, it takes 4 days in overall process of 悶黄, which produces substances contribute to typical flavor, color and taste of yellow tea.
Finally tea leaves are dried to less than 5% moisture and all reactions are stopped. 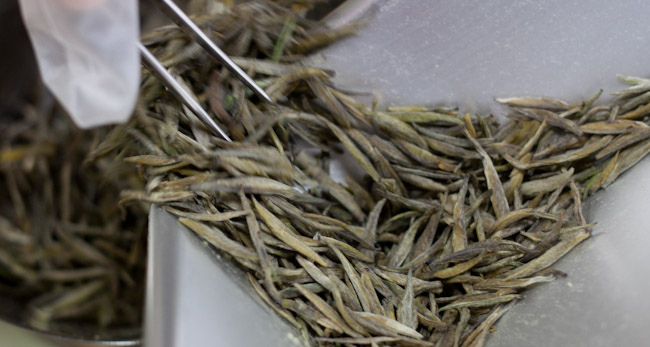 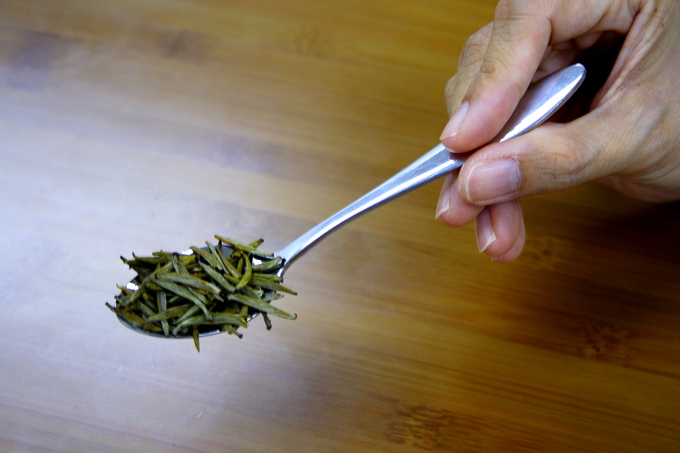 To enjoy Junshan Yinzhen with a well balanced aroma and flavor, the suitable teapot for Junshan Yinzhen is a red clay teapot that contains sufficient iron. For those who are looking for aftertaste, Banko purple clay teapot will give a good aftertaste.
Make sure rinse the tea pot with boiling water for about 10-20 seconds in order to warm it up. Use 3g of tea leaves for 150ml of water. Quickly rinse the tea leaves with hot water at 80 degree Celsius, and then gently pour hot water at 80-85 degree C into the teapot, let it brew for 1-2 minutes. For 2nd brewing, please keep the brewing time exactly half the time of the 1st brewing.

Keep tea away from moisture

Once a bag of tea is opened, please finish it within 3 months if you wish to enjoy its freshness. From the medical point of view, it is safe to consume the tea even if it is kept for a few years. However the freshness disappears if it is kept for too long. Tea must be tightly sealed before it is kept. Tea should be kept in ambient and dry conditions such as in the living room, but it must be completely away from humidity. Tea should not be kept in the kitchen as the environment is very humid. Avoid enclosed area such as inside the cupboard or drawer as these places are damp. Also avoid opening the bag of tea in humid atmosphere. It is recommended to open the bag during a sunny day or under air-conditioned atmosphere. Once tea leaves absorb moisture, deterioration of tea will be triggered within a few days. Tea will then give an astringent taste, sometime it tastes sour. The fresh aroma also becomes weaker.

Beware of keeping the tea in the fridge

Here’s one frequently asked question: what happens if bag is sealed using tape or tea is packed in zipper bag and kept inside the fridge?

For your information, these simple sealing methods are not sufficient. When the bag is withdrawn from the fridge, it is cold inside the bag and therefore causes negative pressure. Air will be drawn from outside and condensation will occur. In addition, if the bag is taken in and out from the fridge very often, this will cause heat stress to the tea leaves as temperature is increased and decreased very frequently. If tea is kept in the fridge, when it is withdrawn from the fridge, it is necessary to leave it in ambient atmosphere for more than 24 hours in order to warm up the tea leaves. Based on our experience, 12 hours is not long enough. We may think tea is warmed up, but inside the bag, the tea leaves are still cold due to insulation effect.

Please feel free to send us e-mail for enquiry at: